I took my low maintenance partner of 25 years to the dentist today. A rare occasion indeed. He works long hours at irregular times so booking appointments is tricky. Like many busy people, he just doesn’t.

A few weeks ago a nagging toothache forced him into a dentist’s chair. After fixing the toothache the dentist kindly offered another appointment to repair two dead teeth. As an eager 16 year old plumbing apprentice Dave yanked an electrical cord out of a truck and an entwined steel grate smashed into his mouth. For thirty eight years these brown scars have obscured his smile, until today.

While he was being veneered I stumbled into a social media post thanking our recently departed Premier Gladys Berejiklian for her incredible efforts during one of the most difficult times in modern history. Sprinkled throughout the many supportive comments were vile, hateful and mean-spirited attacks, almost exclusively by young males.  As a mum of three teenage boys this sad and alarming trend has increasingly caught my eye. 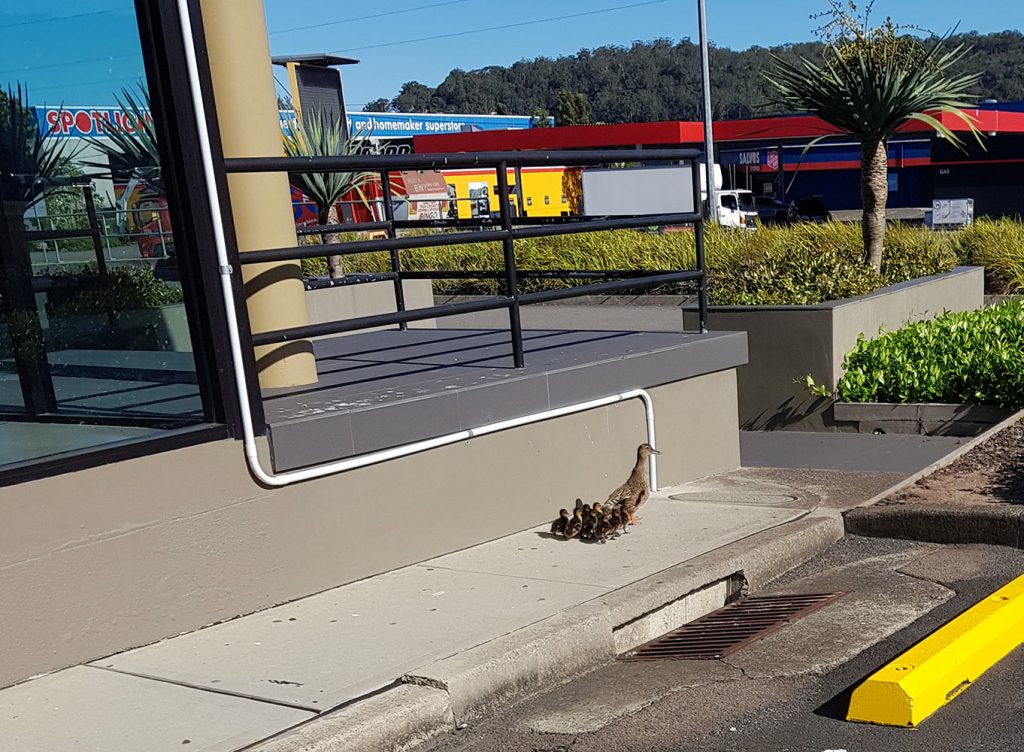 A duck and her eight adorable newborns greeted us on arrival at the deserted storefront. The mother promptly quacked orders to her fluffy brigade and with military precision marched them off into the desolate carpark towards the heaving highway. Cuteness overload. 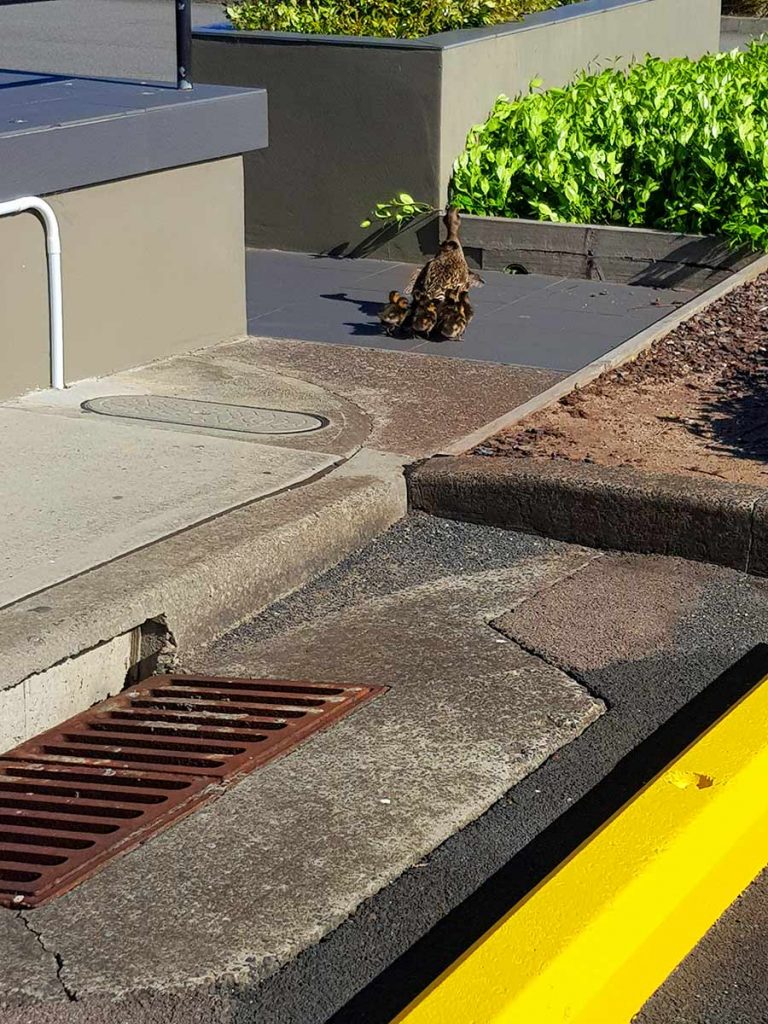 Windows filled with outdoor lounges beckoned. After some time spent ogling I noticed Dave lying face down in the carpark. The highway roar surged up again as I ran toward him. Feeble ‘cheeping’ noises were coming from his heavily anaesthetised lips. A shrill chirp responded from the drain far below. Peering up through the grate sat a tiny distressed duckling . Our car must have interrupted poor Mama duck’s dilemma, forcing her to accept the mission was futile, cut losses and bolt.


Crumbling cement held the heavy metal grate firmly in place. Dave and his newly minted teeth pulled up furiously to no avail. I joined the effort but it wouldn’t budge. The chirping grew more frantic as we wedged random tyre-changing tools from the car into the solid grate.

Dave phoned the Harvey Norman store and explained the situation but the woman on the phone said she had no idea what to do. Things did not look good for little Alexander, christened in honour of Pamela Allen’s book Alexander’s Outing where a little duckling met a similar fate in Sydney’s Hyde Park.

We continued to wrestle with the grate without luck. Suddenly three masked Harvey Norman staff emerged with rolled up sleeves and fierce determination to help save a lost duck.  Pushing and pulling, flapping and quacking, the group eventually pulled the grate free. I had the dubious honour of climbing into the drain hole but sadly our little friend fled in fear along the pipe and could not be coaxed back.

Across the carpark his frightened ‘cheep cheep‘ floated up once again from another grate. The team got to work again and levered it up. One of the staff fetched a long armed dustpan and broom and after various tactical manoeuvres the little guy was scooped to safety. There was pure elation and joy until we realised his family were long gone. 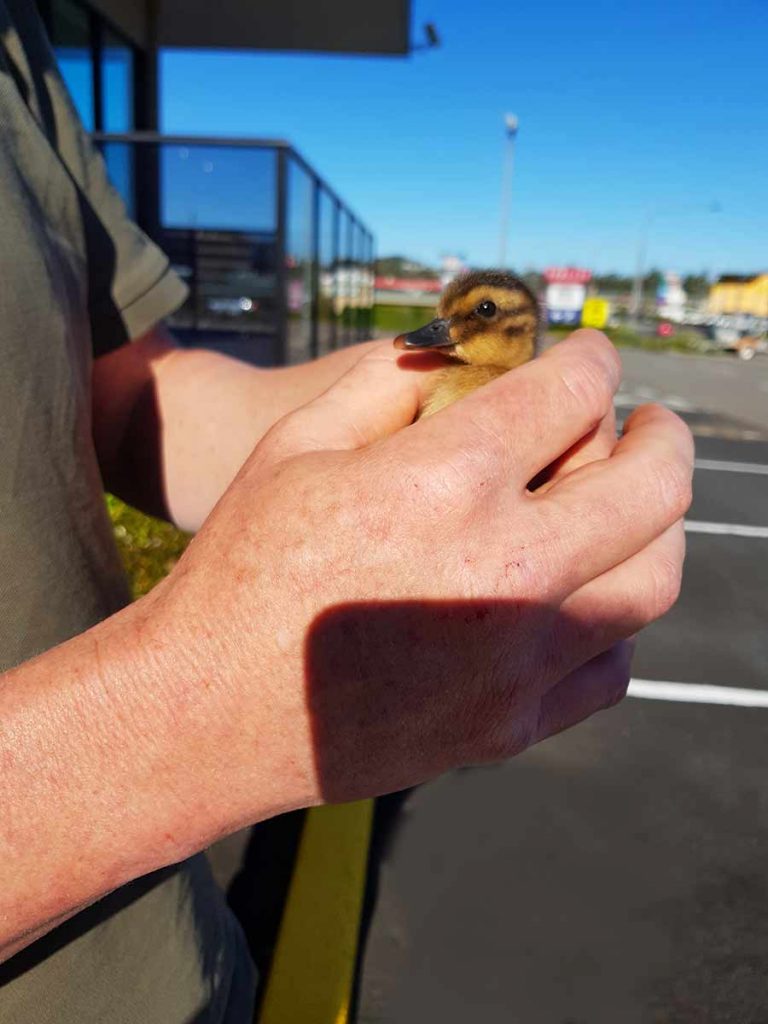 Harvey Norman provided a box to house him and we spread out searching for his family. I headed in the direction of a nearby creek and came across a motel. Two burly security guards blocked the entrance. The motel is now a covid quarantine station and nobody can enter, that is unless you are a duck.

As I explained the situation to the guard, over his shoulder in the far distance I caught a glimpse of Mama duck hustling the crew. Her timing was impeccable and it was starting to feel like a B grade slap stick comedy, made complete with the kind hearted security guard donning full HAZMAT gear to return Alexander to his grateful Mum.

Awash with relief we headed home. Late afternoon sun lit up Dave’s triumphant smile as he regaled each delicious detail of the afternoon’s adventure. While he reflected on the terrible fate that would have awaited Alexander all I could think of was how attractive the men looked sweating it out lifting grates and getting dressed in HAZMAT suits to save a lucky little duck. I wish the young men sitting behind keyboards making unkind, malicious comments about a woman that tried her best could have been there, it was beautiful. 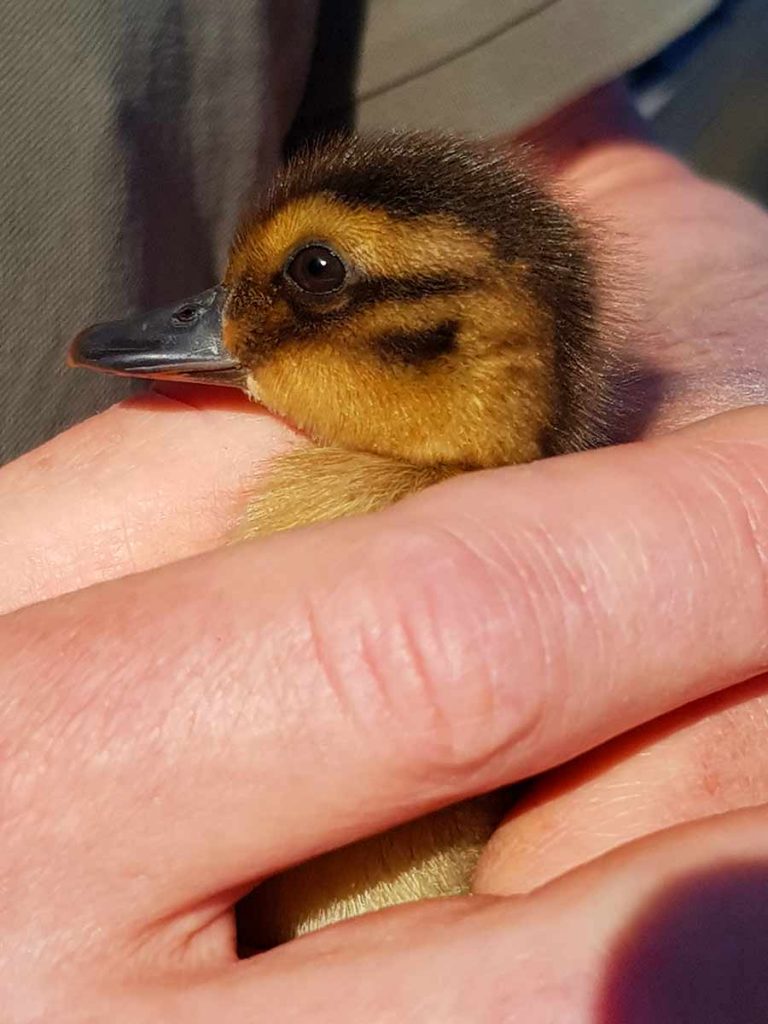